Social and Physical characteristics of my community

Tags: Social characteristics of your community

Please enjoy reading and relate some information to the photos attached. I would be thankful if you leave a comment or feedback in the below comments' option. 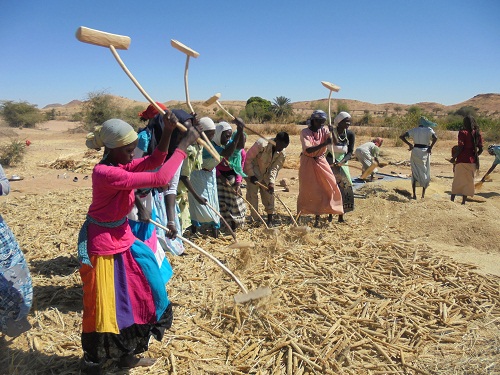 Cooking food together and eating together is my community culture

Social characteristics of my community

Geography and population: Guli rural community is one of the communities in Guli locality (administrative unit) and is the capital of the locality.  It locates at the northern part of Kosti and Rank the capital of the White Nile state. It’s about 45 km far from Kosti urban locality. Guli community considers as a conventional community with an approximate total population of 15,000 individuals representing 10 different ethnic groups.

There are different tribal groups in the community living together, making business and building relationships through marriage, the social traditions and customs are characterized by the Sudanese social norms and culture where hospitality and welcoming are the main norms, it’s easy to build acceptance among other tribes because of this opportunity of hospitality and generosity. A poor person in the community is generous with the limited assets he/she has especially when it comes to food and shelter.

Marriage: relatives and friends come from different parts of the country to attend the marriage ceremony irrespective of the cost and then contribute upon arrival as well as the whole community members including the other tribes.

Funeral:  same as the marriage, as it considers as an important event to attend. Everybody has to come for funeral event despite the distance and the community members within the community are responsible for funeral cost. Funeral usually takes 3-6 days.

Disasters:  the community is potential to flash floods and used to experience such disaster. Community’ members work together to respond to disasters despite the support from other parties such as INGOs and government. Community members organize themselves in committees to respond to the disasters.

Normal practice: community members always eat together whether in house as a family or in groups with neighbors as it’s rare to find individuals eating alone.

- There are traditions such as meaningful participation of women, youth and children in decisions related to social issues.

- Social occasions are expensive and add burdens on the poor community members.

- Women mobility to other communities and cities is restricted to some extent for young girls and in some cases it requires permissions from members of family and close relatives.

Generally, the majority of the community members are poor with limited household assets and limited access to decent productive activities. There is high rate of unemployment among youth and people in other ages.

Fishing: The community is surrounded by a Nile river where some of the members who have fishing tools & equipment are engaged in fishing activity.  Fish is sold out of the community for middle agents who intern sell in the big cities. Despite the village location which is near to the Nile river but fishes are not accessible to the majority of the community members especially poor because of the high demand by the big cities and middle men who control the prices.

Agriculture: Majority of the community members are depending on small scale traditional farming and husbandry of household animals (3-5 goats). Despite the existence of river that is surrounding the community but the majority of the population depend on rain-fed agriculture.

Collective work in agriculture:  during the agricultural season, community members gather together and work every day in one farm and then shift to another farm and so on (land preparation, cultivation, harvesting and so on), they prepare food and tea, coffee and spend the whole day in a farm of a community member and when they complete they shift to another farm the day after.

Marginal economic activities:  some community members are engaged in marginal manual work such as building and constructions in the cities and there is also migration of unemployed youth to cities seeking marginal work.

There are partners working in the community doing slight work compering to the huge gap in the development such as Plan International Sudan which is focusing on education and child protection as well as emergency support. Also government and one Civil Society Organizations CSOs have some activities in the community such as supporting orphans’ education. 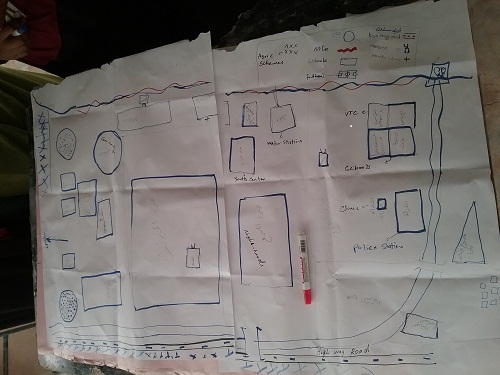 Physical Characteristics of my community

As an Interpretation of the above community map: Guli Community considers as one of the oldest communities in Guli locality in White Nile state, It locates at the west bank of the White Nile River which is bordering the community. At the eastern side the community there is a new high way road linking /connecting the community with another locality. There are six schools (4 primary schools 2 of which for males and 2 for females separately) and 2 secondary schools/high schools one for males and 1 for females. There are also a clinic and traditional health unit, a mosque, inactive youth center, inactive crafts center and active water station in the community. The community is connected with electricity lines.

My community is surrounded by White Nile River 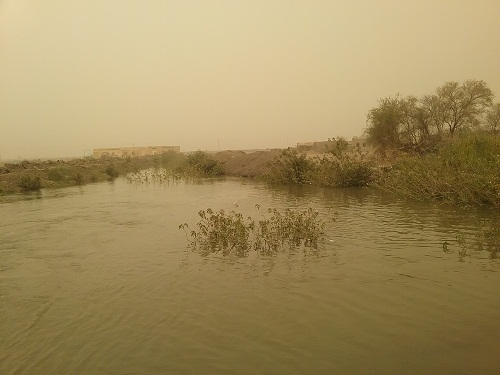 Only few community member are making advantages of River 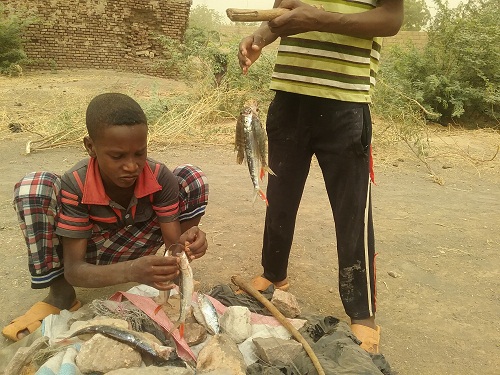