Practicum Research-Putting all together in one collection

This section provides full results: reflection from the field, review of related literature & application of lessons learned from the graduate program. Coupled with interpretation and further analysis.

The following table illustrates Key conflict issues and history. Information written in this section is triangulated with secondary literature.[1] 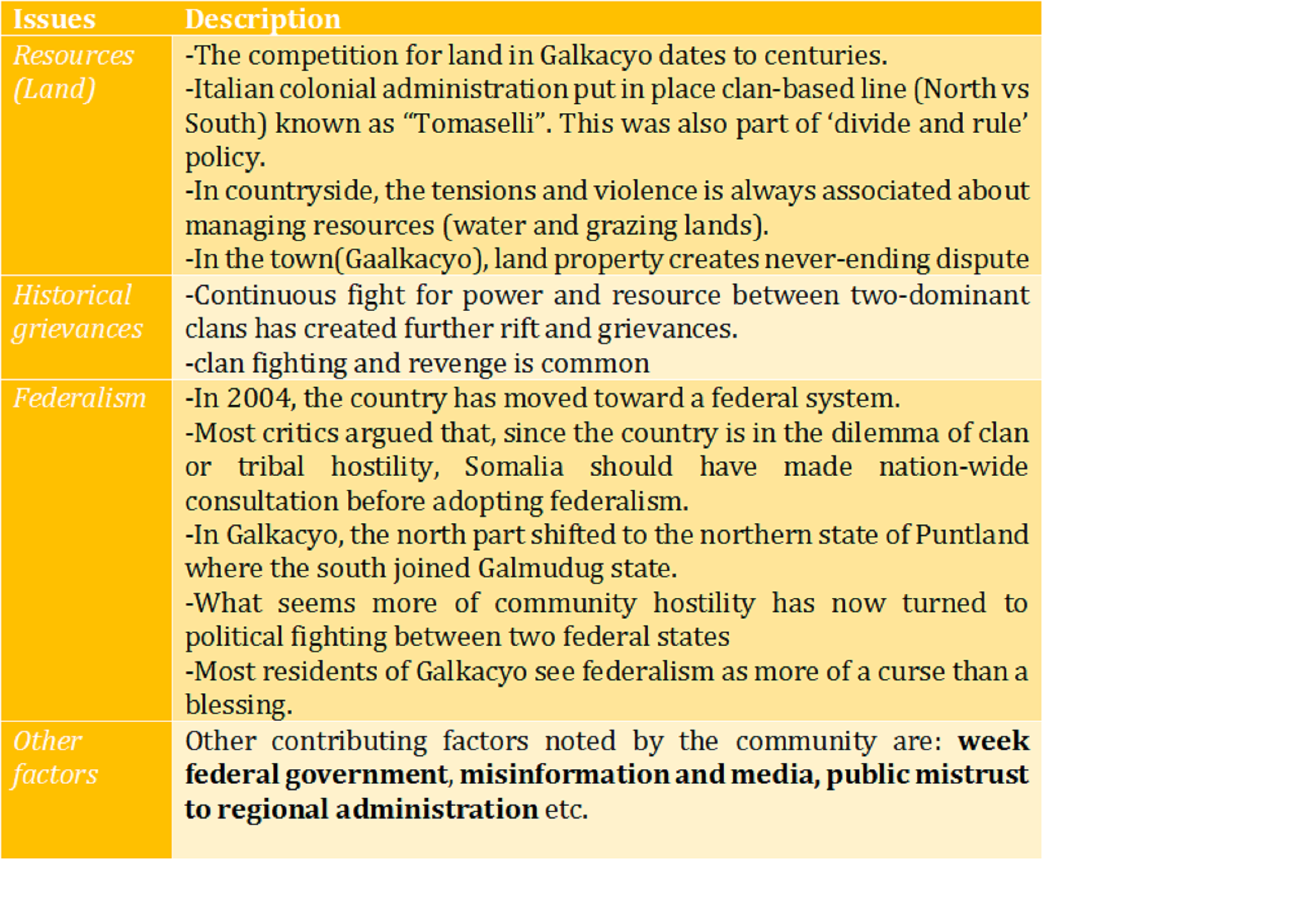 As Roger Mac Ginty and Pamina Firchow detailed it in their article entitle Everyday Peace Indicators: Capturing local voices through surveys (in “Shared Space: A research journal on peace, conflict and community relations in Northern Ireland”): “[Developing indicators of peace] is participatory action research that seeks to find out people’s perceptions of their own conflict rather than impose narratives on them.

It has been noted that approaches used to study peace produces complex, scholarly results that, most of time not useful to local community use. Against this backdrop and building on USIP’s everyday peace indicators/and SEED Scale process of lasting changes success, participants from both North and South Galkacyo were asked to identify things(tangible and not tangible)that determine whether you are more at peace or not.

Surprisingly, respondents from both sides (north and south) have identified similar indictors. The following are top 5 indictors:

[2] One respondents said, “Guns are not bad as long as they’re not making noise, but it is frightening to see armed groups moving around”.

[1] Information provided in this section builds on analysis from the following research reports:

On August 2017, I have started posting #GalkacayoChronicles, short stories about people I have met in Galakcyo via my blog and Facebook page. The aim was to tell breathless human stories of courage and resilience about Galkacayo community and thus inspire audience to think differently or at least get some insights into the life of ordinary people of both sides. The stories were written in both English and Somali language has attracted wider audience.

A. Economic and trade

Modern Galkacayo town is economic hub of Somalia; the spot where imports coming from north and agricultural products from south pass, thus becoming most relied strategic route in the country.

Most respondents agreed that while the tradesmen sometimes fuel the conflict-by financing warring sides, but most, see trade as an inter-connectedness factor and that they NEED each other to succeed and survive. 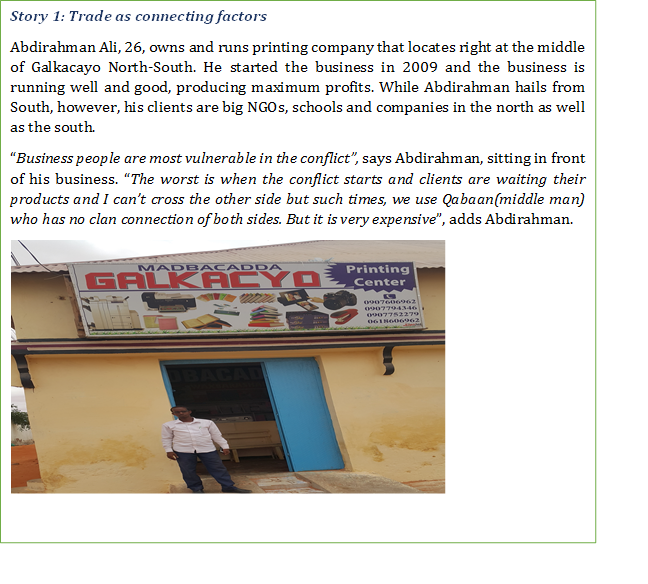 Long beset by civil war and famine, 37.8 of Somalia’s population is literate. 49.7 percent of the adult male population is literate but only 25.8 percent of adult females[1].  However, Galakcyo schools, who are mostly supported by NGOs, provide extra-curriculum activities including; peace and literary competition.  “We’re teaching kids about peace”, says Abdi-Aziz Mohamed Aden, principal of Al’sha’ab school in South.  Mr. Abdi-Aziz acknowledges that inter-school competition, participated by various schools in North and South.

Two young activists, Abdifatah Barre and Najib Abdullahi have recently started tartan/, Peace competition that gives literary awards to outstanding students in both north and South Galakcyo. The 1st winner is given laptop while the second and third one gets $300 & $200, respectively. 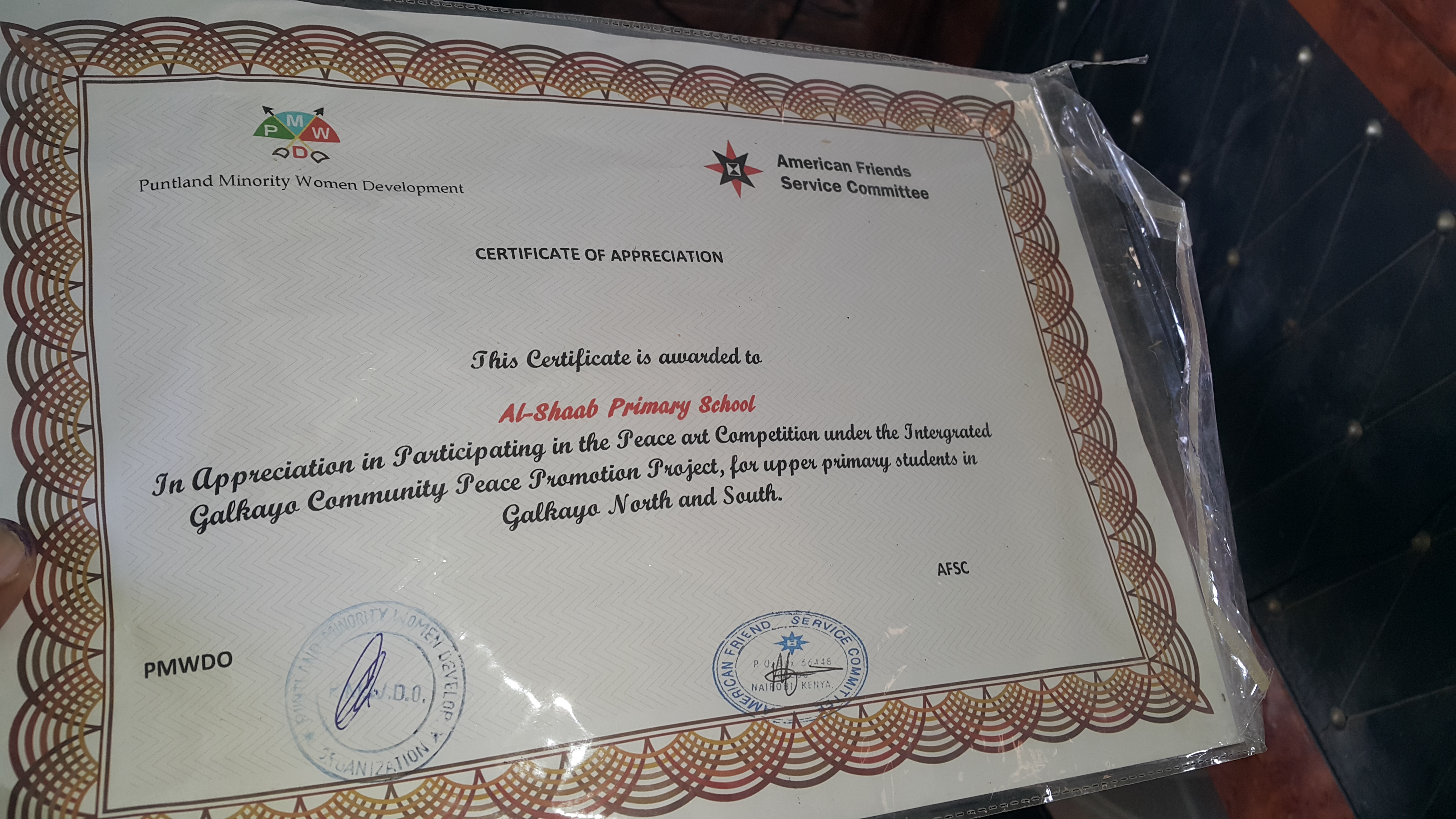 It has been noted by many respondents that GaalKacyo conflict has affected the inter-marriage between the north and south. “You can rarely see young people of both sides marrying each other”, says one female respondent. 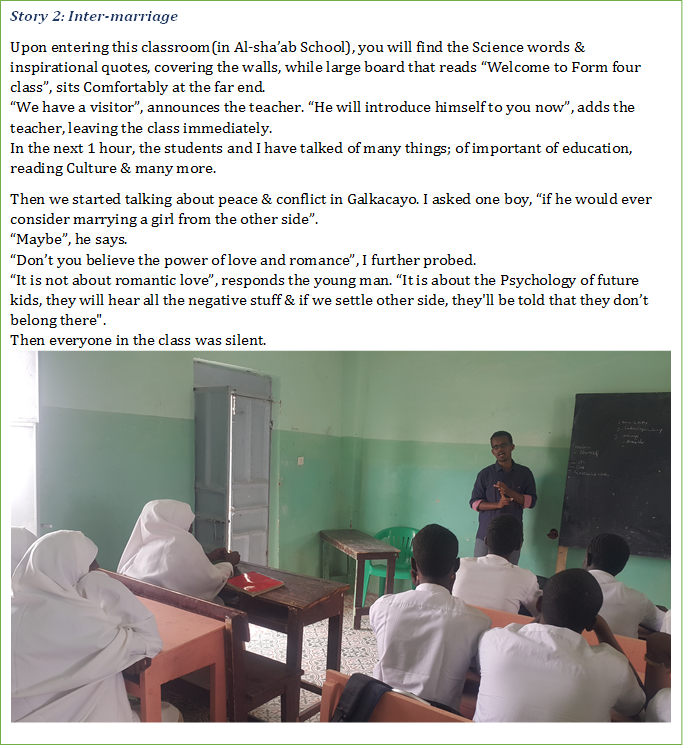